In Honor of Andre Iguodala 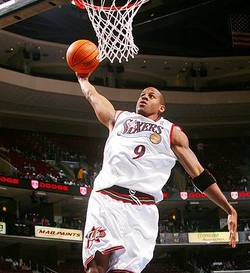 Thank you Andre Iguodala for all the years you have spent on the Sixers, being the leader of a young squad, and contributing to this franchise since you were drafted. Thank you for making an impact on 76ers fans and basketball fans alike with your ferocious game play and spectacular dunks. Every Sixers fan now or that ever was will remember you as a game changer and as one of the greatest players the Sixers have ever had. Once again the city of philly and every fan alike will miss and once again, Thank You

Its been a long time and being caught up with school i couldn't keep up with updating this website. I'm not going to assure it but this website within the next week will be up to date on the 2012-2013 season. Some huge changes have been made to this team and i think they are good for the long one, please check out all the sections of the website all of them will been updated.
Welcome to Philadelphia, the city of Brotherly Love. It's also the city of NBA ballers. From Wilt the Stilt to A.I., Chuck Barkley to Dr. J the Sixers have had a rich history of Hall of Famers. They have had monstrous players like Wilt Chamberlain, jump shooters like Allen Iverson, and Dunk-Fests from Julius Erving almost every night. This website will tell you all about the sixers , the history, present, of it all. If you are a Phili Baller this website is the database for all the Sixers knowledge.